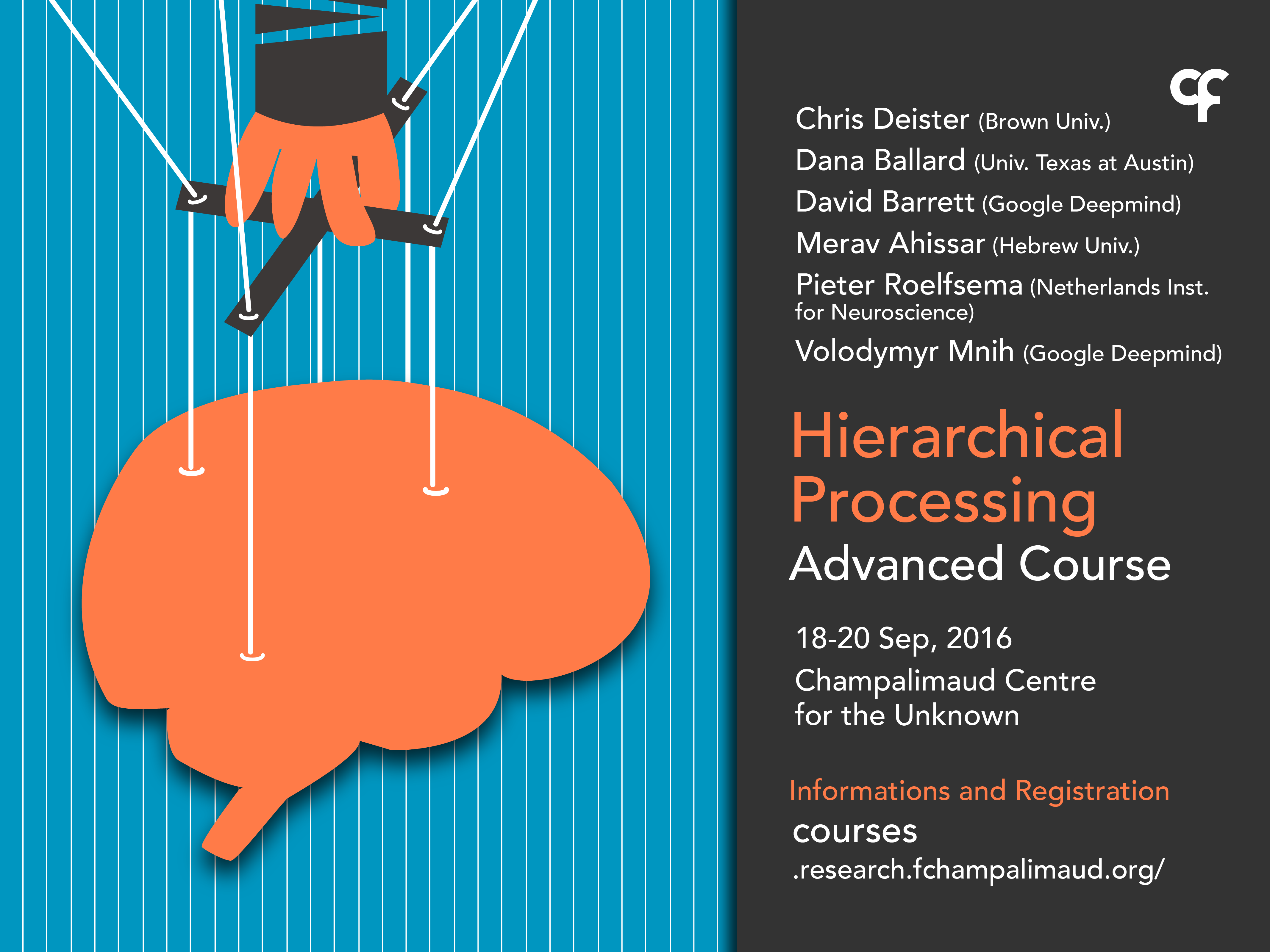 Registration: http://goo.gl/forms/875H0sw5Vdrs66LN2
(Due to the large volume of applications received, if you registered after August 20th, we would like to ask you to wait an email confirming your attendance. Thank you for your comprehension.)

In this advanced course the concept of hierarchy is going to be explored from the point of view of theoretical and experimental neuroscience as well as from a machine learning perspective. In lecture-driven talks we will review what is known and discuss which are the open and most relevant questions at the field. Specifically how theoretical neuroscience and machine learning integrate hierarchy to describe neuronal networks and which are the anatomical and behavioral data supporting the existence of such in the nervous system. Participants will be presented with a historical frame of reference on hierarchy in neural networks (day one), hierarchical coding or hierarchy of sensory systems (day two) and finally hierarchical neural networks in the context of behavior (or solving a task/action/decision making).

Chris Deister
Dr Chris Deister is interested in understanding how cortico-cortical and cortico-striatal interactions work to inform perceptual choice. His training was in basal ganglia circuits, biophysics and theoretical approaches as a graduate student in Charlie Wilson’s lab at the University of Texas. Chris has been using large scale neurophysiological methods to study cortical activity in perceptual behaviors in Chris Moore’s lab. He is currently working on methods to directly investigate cortico-striatal interactions in perceptual behaviors at Brown University.

Dr. Dana Harry Ballard is a Professor in the Department of Computer Sciences at the University of Texas at Austin where he holds appointments in Psychology, the Institute for Neuroscience and the Center for Perceptual Systems. Dr. Ballard received his Ph.D. degree in Information Engineering at University of Irvine at California which was preceded by M.S. (University of Michigan) and B.S. (Massachusetts Institution of Technology) degrees in Information &amp; Control Engineering and Aeronautics and Astronautics, respectively. His research interests include computational theories of the brain with emphasis on human vision and motor control, and artificial intelligence. In addition to the numerous research papers, he has published several books which include: Brain Computation as Hierarchical Abstraction (2015) MIT Press; An Introduction to Neural Computation (1997) MIT Press; and Computer Vision (1982) Prentice-Hall.

Dr. David Barrett received an undergraduate degree in Theoretical Physics from Trinity College Dublin in 2006, and an M.Sc in Sparse Coding in 2007. He completed a Ph.D in Computational Neuroscience and Machine Learning at the Gatsby Unit, UCL, with Prof. Peter Latham and Prof. Prof. Peter Dayan in 2012. After his PhD, he held a joint-research position at the École Normale Supérieure, Paris and the Champalimaud Centre for the Unknown, Lisbon. In 2014, he joined the Computational and Biological Learning Lab at Cambridge University, where he worked with Máté Lengyel. He is a College Research Associate at St John’s College, Cambridge, as well as a researcher at Google DeepMind, London. Dr Barrett’s research goal is to discover new principles of neural computation. In particular, he is interested in understanding how neural networks learn to perform difficult computations, such as probabilistic inference in deep generative models. He combines techniques from machine learning, statistical physics and neuroscience.

Dr Merav Ahissar began her scientific career as electrophysiologist recording single units in behaving monkeys. She then moved to Dr Shaul Hochstein’s laboratory as a graduate student were she continued with psychophysics, studying perceptual learning in adult humans. Dr Ahissar’s laboratory is currently based at The Edmond and Lily Safra Center for Brain Sciences/ The Hebrew University in Jerusalem and focus in  the relations between perception and cognition. Specifically, her research is trying to decipher the perceptual deficits of reading and learning disabled individuals and the relevance of these perceptual deficits to their cognitive disabilities.

Pieter R. Roelfsema is currently the Director of the Netherlands Institute for Neuroscience (NIN, KNAW) and Strategic professor at AMC, Amsterdam, NL. He received his MD degree at the University of Groningen in the Netherlands in 1991, and received his PhD degree at the University of Amsterdam in 1995 for his work on the visual system of the cat in the group of Wolf Singer at the Max-Planck-Institute for Brain Research in Frankfurt (Germany). He has since worked as a postdoc in the department Visual Systems Analysis at the University of Amsterdam, and became in 2005 strategic Professor at the Free University of Amsterdam, before also becoming a Professor at the AMC in Amsterdam in 2012.  His lab at the NIN is aiming is understanding cortical mechanisms of visual perception, including perceptual organization (addressing the role of feedforward and feedback processes in visual perception), memory ( including working memory, decision-making, consciousness and how multiple tasks may interfere with each other) and plasticity. His lab is using a number of different techniques including computational approaches, human behavioural paradigms and multi-electrode recordings in rodents. One of the goals of his lab is to create a visual cortical prosthesis to restore vision in blind people.

Dr. Volodymir Mnih completed his Master’s degree in computing science at the University of Alberta, supervised by Csaba Szepesvari. He then proceeded to do a PhD in machine learning at the university of Toronto, under the supervision of Geoffrey Hinton. He is currently working as a researcher in Google DeepMind (London, UK). He is part of the DQN project at DeepMind: training Neural Networks with Reinforcement Learning to achieve human level control in a wide variety of tasks.